New trilogy in the works and toilet paper!

Just kidding, I don't have any toilet paper. Well, except what I plan to use. LOL

It seems like the whole world is panicking right now. Maybe it hasn't affected me as strongly because I already self-isolate to a degree. It kind of comes with the territory of being a writer, doesn't it? Lol I won't talk anymore about the virus, because I'm sure you've all heard more than enough. And if you're like me, you're sick of hearing about it, no pun intended.

In other news:
I'm currently working on a new trilogy as I prepare to FINALLY finish moving out of my hurricane damaged house and begin repairs. Woohoo! It's so strange to see things this close to being fixed. After all this time, it almost doesn't feel real.

It's also great to be writing again. This is the first book I've worked on in 8 months. I've simply had too much else going on to have the time or the energy to write. But as things progress with the house, I'm finally able to carve out a few hours to get back to my actual job.

For the moment, I'm still using my bed as a chair, combined with a really hard cushion (because it's the only one high enough to reach the desk) and it's KILLING my tailbone. Therefore, I'm not writing as much as I'd like, but I AM writing.

I've had a few people ask if I'm having writer's block. No. LOL I have a ridiculous amount of stuff going on in my life. I've spent the past almost 2 years dealing with insurance to try to get enough money to totally gut and remodel our home. The damage from hurricane Michael was extensive. Then, once the insurance claim was settled, we were robbed by a shady contractor. So, I've had to file a police report and do my best to follow up on that bullshit. We also have a completely incompetent mortgage company who sold our loan (which we have no control over) in the middle of all of this, further delaying us actually getting any more money to begin work once we found a new contractor.

Guess what? The geniuses managed to transfer our insurance money (that was in a separate holding account) into someone else's account entirely! They didn't even know they'd done this until I figured it out!!!

It became my full-time job to track down this money like a hound with the scent of bullshit. Painful cushion aside, even with a non-hurt ass, I didn't have time to write. If I had not worked at this so diligently, we would not be on the verge of finally beginning work now. The amount of idiocy I've had to deal with to simply get the right money in the right place is unreal. Not to mention, I WAS FREAKING ROBBED!!

So, yeah, I've had my hands full. For the record, if I ever get my hands on that "contractor" I plan to beat him to a pulp and I'm well-qualified for the job.

But enough of my rant. Here are the details on my current work in progress. :)

Lord of Frost, originally planned as the third book in the Unseelie of Atlanta series has become the Rhiannon Frost Trilogy. I simply had too much story for one book. This is still part of the Unseelie world and will take place after the second book, Wounded Heart, that I also need to finish writing. So, I'm labeling it as an "Unseelie of Atlanta world novel." That way people will know it's part of the same world with some of the same characters, but it tells the story of Rhiannon Frost.

This is also my first Paranormal Women's Fiction novel. What does that mean exactly?  For one thing, the heroine, Rhiannon Frost is 40. It deals with many age related issues as well as the usual amount of ass kicking you've come to expect from my books.

The blurb is a work in progress, but here's what I have so far.


Even someone half-fae can have a midlife crisis. That’s what Rhiannon Frost is discovering. She’s fresh out of a bad relationship with a younger man, her new daughter-in-law might ACTUALLY be evil, and her house was recently hit by a hurricane. To top it off, she’s having human menopause symptoms that are messing with her magic.

However, none of that is going to stop this demon hunter from kicking ass and chewing bubble gum, and she’s fresh out of bubble gum. 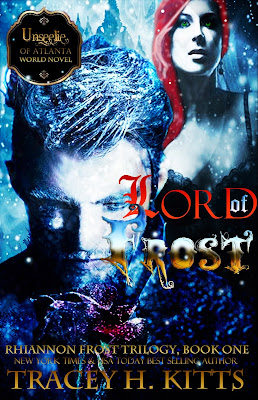 I'm really enjoying writing this story and as you can probably guess from my rant above, much of it is a true story disguised as fiction. For the moment this book is my escape. It is my sincere hope that it can be yours as well.

I'm currently aiming for a December release with book one.