For those about to stuff, we salute you! 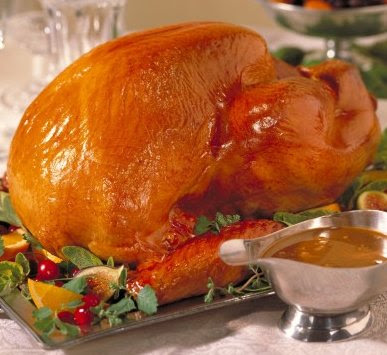 I've shared this before, but I thought it might be a good time to repeat myself. :)

The Holiday Season is once again upon us and the most common dread for cooks is cooking the turkey. Whether it’s Thanksgiving or Christmas, the very word “turkey” can strike fear into the heart of an unseasoned cook. (Get it? HAHAHA)

So, with this in mind, I thought I’d share a great Thanksgiving (or any other time) Turkey recipe.

A few notes first - The recipe I’m going to share for gravy includes using the liver. Personally, I don’t use the liver because it grosses me out. But, I know lots of people do, so I've left that part in. Be assured that I use this recipe without the liver and it’s great.

Also, this is for after the turkey has been thawed. Please follow the guidelines (that should be on the turkey) for thawing it properly. And don’t forget to relax, cooking the turkey is no big deal.

Remove giblets from turkey (reserve for gravy, recipe follows). Rinse turkey and pat dry. Rub inside and out with oil. Season with sage, allspice, salt and pepper. Stuff neck and body cavities with onions and truss, if desired. Place turkey in roasting pan. Roast, allowing 18 to 20 minutes per pound, until juices run clear with no hint of pink when thigh is pierced. (FYI - If you are cooking a 12 pound turkey, that's roughly 4 hours.)

During the last hour of cooking, baste turkey 2 to 3 times with honey.

Serve with pan gravy and garnish with decorative string of cranberries and bay leaves or sage leaves, if desired.

Giblets
(You can also use a few bits of meat from underneath the bird where no one is likely to notice you removed them. That is if the whole idea of giblets wigs you out. Remember the gravy should be done after the turkey. Also, you don’t have to cook it for 40 minutes if you use the already cooked pieces of turkey like I suggest here. Only cook until it bubbles. The best place to remove a small bit of meat is just underneath the rear. Use a long utensil of some sort (placed in the opening) to lift the bird from the back and tip it upward. Slice off a small piece and chop it up to look like giblets. I also recommend not doing this in front of anyone or thinking about it for too long as it can cause ridiculous amounts of laughter when you put a spatula or grilling fork up a turkey’s butt.)

2 green onions (I also use caramelized white onions as the flavor of green is too strong for me.)

Place giblets, except the liver, in a saucepan with water, celery tops and green onions.

Chop liver and reserve. (Remember you don’t have to use it.) Bring water to a boil over medium heat. Reduce heat and simmer over medium-low heat for about 40 minutes or until giblets are tender. (Or just until it boils if you used the chopped turkey meat.) Strain broth and reserve.

Chop cooked giblets and combine with chopped liver. (Skip this part if you used the chopped turkey meat.)

In the same saucepan, bring 2 cups combined pan juices and giblet broth to a boil.

Season to taste with salt and pepper.

If you're holiday season is particularly stressful, I've got another suggestion/recipe. Sparkling cranberry juice with a splash of spiced rum. But don't have too much or you might decide everyone needs to watch while you put a spatula up the turkey's butt. Ha. Ha. Ha.

Also, if you really want a good laugh, you can truss your bird up to look like you used a Japanese bondage technique. Be sure the people you are cooking for have a sense of humor first.

Time to feed your ereaders

Here are a couple of reads I think you might enjoy!

"Where there is Dark, there is Light."

Claimed by the Elven King by Cristina Rayne

"Can a human ever really win the heart of an elven king?"

"A woman, torn between two destinies, seeking the two men who are fated to find their way to her."

"Can two alpha wolf shifters love Benie enough to put their differences aside to save her?"

Do you do NaNoWriMo?

For those who don't know, that's National Novel Writing Month. I've never participated before. At least, I thought I hadn't until I read a post today by the lovely and talented Sidney Bristol. As it turns out, I'm a NaNoRebel. You can check out Sidney's post HERE on the Romance Authors Marketing Network.

Anyway, all I knew about NaNoWriMo was that a bunch of people (some authors already, some hoping to be soon), tried their best to finish a novel in the month of November.

As many of you know from reading my blog or being my friend on Facebook, I have issues with anxiety. Not always, thankfully, but it can get overwhelming at times. Have a written a novel in a month before? Sure. I've written 80,000 words in just two weeks before. But committing to writing at least 50,000 words in one month? Nope. I didn't think it was for me. It just seemed like added pressure.

With writing full-time, marketing, editing, doing cover art, etc., and taking care of myself, my family, and my dogs, it just seemed like too much.

Don't get me wrong, I write all the time. Almost every day, in fact. The only exception is that after a big project (like writing a whole series in just a few months), I like to take a week or two off. During that time, I still market and work on cover art if I need to, but I don't write.

I also have a schedule that sits on the left side of my desk. It reminds me which books I need to release during each month and what I need to have written for the next year. Adding something else to that seemed more than a little bit intimidating.

In the past I've written a novel during November many times. Not because I signed up for anything, but because it was already on my schedule. So, I told people that I didn't do NaNoWriMo, because I do get asked pretty often. It turns out I was wrong!

If you are writing during the month of November, you are participating in NaNoWriMo. Wow. I just learned that. LOL

I'm not sure that I'll sign up on the website, but I do have some definite goals for this month. They aren't the traditional complete novel of 50k or more though. My goals are to finish editing a novella called Dragon Charmer and add about 15,000 words to it. After that, I'm going to immediately start working on the 4th book in a new series for next year called, There's No Place. If I can finish those two things this month, I'll be very proud of myself. I'll also have written around 70,000 words.

What about you? Do you have specific goals that are not exactly standard NaNoWriMo?

Sign up here to be all "official" and stuff.