I just realized how long it's been since I shared one of Dracula's Drink recipes. Wow. The good news is I've been busy writing. The bad news is, I haven't been as active here as I'd like.

So, in an effort to make up for my absence, how about a little Sexual Healing?

Before someone reads this and starts thinking I'm an alcoholic (because someone is bound to do just that) these drinks are not enjoyed by yours truly very often. Why? Well, because they'd ruin my otherwise healthy diet. HA. HA. HA. Having said that, I'm a grown woman and every now and then, I like a good drink.

As usual all ingredients are to taste. I use more rum than anything else. HA. HA. HA. But that's just my preference. (I can't recommend Captain Morgan enough.) I also go very light on the cream or skip it entirely because I'm lactose intollerant.

So, if you're wondering, it's just as good without the cream, but I've got friends who swear the cream is what makes the drink.

This post is about something that's been on my mind for a while. It's about more than just bad language. In my opinion it's more about bad behavior. In real life I have a potty mouth. However, I know when it is and is not appropriate to "let it all hang out." For example, most people wouldn't drop the f-bomb while visiting their dear old 75 year old aunt. It's just not polite. So, why would you speak to fellow authors like dirty hookers during a chat? Beats the hell out of me.

It also (as an author) is very off-putting to show up for a chat and find the other authors are too busy trying to carry on a raunchy conversation with each other to actually discuss their books. Or worse yet, interrupt you trying to discuss your books with their same raunchy conversation. Repeatedly. It's so far beyond rude I don't think there is a word to describe it.

I do use bad language in real life and anyone who knows me is used to it. That doesn't mean I think it's okay to walk up to a fellow author (or favorite author) and say, "Hey, I loved the cock on page 69!"
Posted by Tracey H. Kitts at 1:34 PM 7 comments: 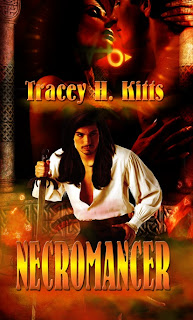 Jane Masters has no idea she’s a necromancer. Luis and Henri are the vampires responsible for the power mingled in her blood. Though her love life improves dramatically after meeting them, Jane faces a more urgent situation than dating a vampire or two. As Luis and Henri reveal the details of her past life and the source of her power, they learn there’s a killer on the loose and Jane is next on the list. As for her newly discovered past with the vampires, her heart remembers them. But will she survive to love them this time?

Necromancer is a reissue that has been revised, expanded, and re-edited. Originally published by NCP as Brain Dead.

http://newconceptspublishing.com/tracey-h.-kitts/necromancer/
Posted by Tracey H. Kitts at 12:24 PM No comments:

A villain is known by many names, such as blackguard, scoundrel, knave, rascal, rogue, badman, or evildoer. Who among us has never heard these terms before? Do you ever stop to wonder what a story would be like without them? These residents of E-Ville do have their purpose. Without a villain, there is no conflict, and without a conflict, there is no story.

A hero is all of the things within us, we wish that we could be. They are the ones who stand up for what is right, regardless of the consequences, our knights in shinning armor. A hero gives us hope that there is some good left in humanity, and perhaps some good left within ourselves.

The world loves a hero, but without the villain, he would be just like everyone else. We love to read a story where good triumphs over evil, proving once more that there is good in the world. People are moved by the moment in a story when someone is bold enough to fight for what they believe in, to protect the innocent, and defend the defenseless.

Without a villain, there would be no reason to do any of these things. Beowulf, for example, measured his self –worth by his reputation. “They themselves looked on when, bloody from my foes, I came from the fight where I had bound five, destroyed a family of giants, and at night the waves slain water-monsters …”

If there were no monsters to defeat, he would not have this reputation. Where would that leave him? If there were no villains to provoke such noble qualities within our hero, he would be no different than the average person. Sure, Beowulf was a big, strong man. However, without monsters such as Grendel to prove the heroic worth of his abnormal strength, what is he good for? If not for an enemy to overcome, men like Beowulf might have lived life quietly and uneventfully as a peaceful, though somewhat oversized, farmer.

The purpose of establishing a villain’s reputation is to build up the hero. For example, if Grendel were not so evil, Beowulf would not sound so righteous. “Then from the moor under the mist-hills Grendel came walking, wearing God’s anger … From his eyes came a light not fair, most like a flame.” Every hideous expression, every claw, and every scale the evildoer possesses makes our hero seem all the more handsome. Everything that is told about Grendel is to make him pale in comparison to the goodness, and bravery of Beowulf.

The poet repeatedly refers to the darkness and evil of Grendel and his mother, as well as their surroundings. “It is not far from here, measured in miles, that the mere stands … [t]here each night may be seen fire on the flood, a fearful wonder.” If the mere were not so frightening, Beowulf would not appear to be brave for facing it. It takes no great bravery to approach a normal pool of water, but to approach a lake that boils with fire is not for the faint of heart.

It is also mentioned several times that Grendel and his mother are the descendants of Cain. “Then Cain went as an outlaw to flee the cheerful life of men, marked for his murder, held to the wasteland. From him sprang many a devil sent by fate.” Cain was thought to be the ancestor of all monsters. He is also the first recorded murderer. Whether or not he is the first person to actually commit murder remains to be seen, but the vileness involved in the act of killing ones own brother is great. This evil seems to be reflected in the physical appearance of his descendants.

One would think that a warrior fierce enough to defeat such evil must be favored by God. “Holy God of His grace has sent him to us West-Danes, as I hope, against the terror of Grendel.” This further builds the reputation of Beowulf.

Yes, the world would be more peaceful if there were no villains. Nevertheless, most news programs would have nothing to report, if not for crime. Authors would have no story to write without a conflict. How would we know what constitutes good, without evil as a comparison? Somewhere in the mix, there is a balance. Every truly great literary work has managed to achieve this balance. Beowulf’s story proves that although good may ultimately triumph, it needs evil to achieve its status.
Posted by Tracey H. Kitts at 10:07 AM No comments: