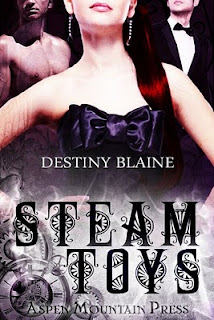 
Revenge is a hot, bitter dish when served up enthusiastically by someone empowered by extra steam.

Heidi Labeidi, a successful Nevada brothel owner, had the world by its tail until her deceptive lover Stan Graves disposed of her. Lost somewhere between life and the afterlife, Heidi materializes in her former home thirty years after her death. She has a second chance and she’s hell bent on solving her own murder.

With a knack for creating pleasure-inducing trinkets and furniture, Edward Brady is an eccentric mad scientist on the verge of greatness. He’s also in desperate need of an assistant and his problems are solved when he discovers a sensual ghost enjoying his sex toys.

Heidi has something to offer Edward but her assistance comes at a price. And when Edward becomes an assassin’s mark, only Heidi can help him. Will Edward barter with a ghost who can save him and if he does, will the former madam become the one woman Edward is unable to resist?


Heidi squeezed his fingers. “You’re a thoughtful man, Edward, but trust me when I tell you: I’ve ruined many a man’s reputation. You’re considered a genius in this town. You don’t want this city to turn its back on you right now. You’re on the verge of something great and I want to come along for the ride.” She slid her arm under the table and touched his knee. “And I want a lot of rides with you, Edward.”

His damn prick was ready to negotiate the terms.

You do?” Edward asked, engaging himself in what must’ve looked like an odd one-sided conversation. By the time he realized what he was doing, half the restaurant’s customers were now turning around, staring at him with marked curiosity.

Heidi tilted her head toward some of the patrons. “You’re seated at a table for two. You requested a couple of wine glasses. Two meals have been served. This seat is vacant and you’re holding a hand that doesn’t exist.” She looked down at their entwined fingers. “Your thumb is jerking as if you’re massaging my wrist. You don’t think this is newsworthy for the Las Vegas Lifestyle Magazine?”

“You’re the most beautiful woman I’ve ever seen,” Edward admitted. “If I can see you, then they must.”

He stood too as a polite gesture.

“I don’t exist in your world. You’re the only one who can see me.”

Heidi held her shoulders back. A quick tilt of her head sent ringlets tumbling across her shoulders. “That depends on who you ask at the moment. In public situations like this, I recommend that you listen and let me do the talking. Some here are ruthless snakes when it comes to tearing down a man’s reputation, especially one like yours, and they’ll be anxious to poke fun at the crazy man, the man who inevitably will catch the eye of their women because of his deep pockets.”

“You’re about to make millions, the kind of money this city hasn’t seen since the days of Howard Hughes, and you’re acting as crazy as Hughes himself.”

“I’m not hungry,” he told her, feeling like he’d known her at another point and time in his life. “I want to take you home and—”

She took a deep breath. “Oh for heaven’s sake, sit down and finish your meal and then meet me at the curb. As long as you’re looking at me like I’m dessert, there’s no way you’ll enjoy your dinner. Besides, you’re drawing too much attention.”

“I would think someone in your line of work craves center stage.” he pointed out, snapping at her.