It has nothing to do with sandpaper underwear

It's been a rough month and not just because I decided to try on some sandpaper underwear. Ha. Ha. Ha. Everything in the world has gone wrong. Thank God I still have my health. Seriously, I am very thankful to have my body (at least that works) fully functioning and still capable of exercise and hopefully losing weight.

It’s been a while since I was able to blog, so I thought you all might find it entertaining to hear why I’ve been absent. At the very least it’s worth a laugh. Or maybe you can relate?

First of all, I’ve had some financial issues. (Anyone who has experienced this knows the stress I'm talking about.) Obviously, I’m not going to get into all that in public, but I can say it’s been a trial. And for the record, I am not rich. So many people think that because you’re a published writer that makes you rich. NOT. (Wow, I’m having a 90’s flashback) My royalties add up to about a part-time income. I’m hoping to change that with hard work and more stories, but I digress.

Aside from the financial stuff, my fridge is leaking, the air in my SUV is broken and it’s ball boiling hot here in Florida right now. We’re talking highs in the 100’s and a humidity level of about 80%. Bleh.

My poor little dog Roscoe is having allergy issues (as am I) because of the drought we’re experiencing. All the dust has us worked up. So, he’s having to wear one of those goofy looking collars to keep from scratching his ears so hard. I include this not only because he looks funny, but because I have to baby him more because of it. He gives me that little face that seems to say, “Mommy, why do I have to wear this damn thing?” And before you know it, I’ve spent an hour watching TV and petting him. HA.

Sooo, where was I? Oh, yeah. To top it all off, my computer (Dell piece of CRAP) crashed for the second time since January. I’ve been out of commission for almost a month. Just as I was beginning a new story too. As it turns out, the motherboard (yeah, it’s a MOTHER all right) keeps going out. This time, they replaced the entire hard drive. 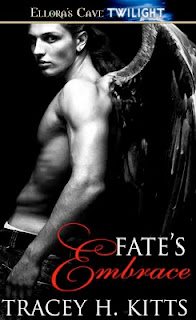 During this time I had a new release that I couldn’t even promote. If you’d like to check it out, the title is Fate’s Embrace and I’m very proud of my second book with Ellora’s Cave.
http://www.jasminejade.com/p-9422-fates-embrace.aspx

Now the good news! As of last week, (thanks to my husband who is handy, has a nice tan, and a cute goatee) the air in the SUV is fixed. Hallelujah!

And as of last night, thanks to God, the repair man, and ME, the computer and all my files are finally restored. As of right now, I am getting back to work on that story. And making a point to avoid sandpaper underwear.
Posted by Tracey H. Kitts at 1:44 PM No comments:

Why did I write that book?

So, why did I write RED?

When I first started thinking of this article I wondered how I would ever pick which book to talk about. A lot of my ideas come from dreams. I keep a dream journal just in case I ever need some good material. Ha. Ha. Seriously, I had a hard time narrowing it down. Finally, I decided to talk about Red, the first book in my Lilith Mercury series.

I chose Red not only because it was the first novel I’d ever written, but because I put an awful lot of myself into it. I wrote Red in response to many things and each character means something different to me. I’ll start with Lilith.

Lilith (as some of you may have already heard me say) is my dark side. I have always had a love of comic books. I invented Lilith during study hall when I was in the 8th grade. I sketched her picture and knew her name the instant she was finished. Lilith: Werewolf Hunter. I came up with the last name and tweaked the outfit years later. I say she is my dark side, because she is. She says the things that I think, but am too polite to say. (Most of the time.) She does the things that I would, if I could get away with them. And like all girls who sketch their own superhero, she started out looking like me and I never changed that. However, she is (despite popular myth) the only female character deliberately modeled after myself. I figured that would be the easiest way to keep writing her story. Shouldn’t we know ourselves better than anyone else? I invented Lilith in response to a need to kick ass.

Marco, the alpha werewolf in the series, was supposed to be the bad guy. However, the instant he walked onto the page I fell in love with him and that was no longer possible. He is everything I think a hero should be. (Though he’s not the only man in Lilith’s life.) Strong, kind, and always compassionate. BUT, he knows when it’s time for action and doesn’t back down from a fight. I wrote Marco in response to all the wimpy alphas I’d read over the years. Never again. Ha. Ha.
And since this post can’t include everyone in the Lilith universe, I’ll finish the introduction of characters with Dracula, who makes his appearance in book three. I have dreamed of him all my life. Literally. Since I can first remember writing down some of my dreams, I remember this tall, dark, handsome figure. Maybe it was a glimpse of my destiny, since he would one day be a part of my stories. I’ve always known what he would look like, how he would act, and the smell of his cologne. Seeing him finally walk onto the page felt familiar and I loved it.

As for the rest of the story, I let my imagination run wild. I wanted to write my own werewolf mythology. I wanted to tell where the first vampire came from, according to me. So, I did. These characters were too special to me to just put them in any old world. They needed their own unique universe. I think this clip from Red gives a hint of what’s to come well enough without me breaking it all down. I don’t want to give too much away.

“Lycanthropy was created during the only world war the planet Terra has ever known. It’s a man-made disease, born of nightmares. It was engineered as a biological weapon by Lionel Ferdinand, a scientist with radical ideas of what should be done with individuals who disagreed with his own political views. The idea was that people contaminated with the disease would transform and annihilate everyone else. Not everyone is capable of contracting lycanthropy, however. Just as some people have immunity to certain diseases they have been immunized against, others have a natural resistance. It was from these people that a vaccine was developed. Many hoped it would be ‘the cure’ for what was at the time known as the animal virus.

Unfortunately, such was not the case. The virus ran rampant. The only person rumored to have developed a successful vaccine was Ferdinand himself, who had at this point already been killed, slaughtered by a monster of his own making. Only pieces of his research were ever found. The complete formula, it would appear, was in his head. And most unfortunately, that had been lopped off by a werewolf."

I have always loved mythology and anything macabre. Vampires, werewolves, you name it and I’ve probably read something about it. I get asked often what books I like to read. I don’t read anything (not for years now) in the same genre I write because I don’t want to be influenced. I want my ideas (however crazy) to be my own. If they sound like someone else’s, that just goes to show that great minds think alike. Ha. Ha.

So, I wrote Red and started the Lilith Mercury series because these characters wouldn’t stop talking to me. They nagged me day and night until I finished the first two books straight through in three months and submitted the first. I’ve always said that I write what I like and I hoped that since I enjoyed the story so much, other people might feel the same. Their story needed to be told, and as I’ve often said about Dracula, “The world would be worse off for having missed this vision.”

By the way, if you like the Lilith series, there are hints of her world carried over into my other stories. For example, she makes an appearance in Bitten, though just briefly. I wanted my world to meld seamlessly with the real so much that it began to seem possible.
Posted by Tracey H. Kitts at 9:29 PM 1 comment:

Funny story and an update on projects

As soon as I stop my maniacal laughter, I'll start with the story. *clears throat* Okay. I'm ready.

I had the unfortunate displeasure to run into someone who does not think highly of romance or those who write it. This happens often, but this time was really funny. I don't know if it's because I'm getting older and I don't care. (I'm not that old.) Or maybe I'm just tired of people forcing their narrow minded opinions on me when I didn't ask.

Anyway, this person goes on to say how romance is an escape for people who "never get laid." Well, whether it is or not, that's offensive. They then said, "people who write it are just living out their sick fantasies."

I cut them off. "You're wrong. I'm actually writing to share my experiences. The most plausible way to do that is to present it as fiction. After all, if I wrote it as a memoir, I might get arrested. Some of this shit is illegal in Alabama and I don't live far from the state line."

Sorry, I can't stop laughing. The point is, not another word was said. HA! Take that.

Now for the update:

I'm working on several projects at the moment. As a lot of you know, I'm published with more than one house. I'm working two projects for Ellora's Cave and one for New Concepts Publishing. The one for NCP is the long awaited continuation of the Lilith Mercury series. I had to take a break from Lilith before giving it one last go-over, just to be sure I haven't missed anything I meant to include. Thank you so much to everyone who has written to me to ask about the next book. It means a lot to know you like the series so much:) I hope to have book six in the series turned in to my editor by October.

You might have guessed what it's about if you know me well. Once it's complete, I'll tell you the name:)
Posted by Tracey H. Kitts at 12:11 PM No comments: