How about some cognac shrimp?

As many of you may already know, I love to cook. Especially, when the weather changes. Something about cooler temperatures (which I wait for all year) really taps into my inner "Martha Stewart" or whatever you want to call it. LOL

So far, I am LOVING this wonderful fall weather, and I'm breaking out a few recipes that I haven't cooked in a while. Well, that and as I'm editing Frankenstein: Unleashed, I keep fighting the overwhelming urge to start watching Buffy The Vampire Slayer all over again. But, I'm rambling. Back to the recipes.

Here's a good one.

This easy shrimp main dish is quick to prepare. Also, if you're lactose intolerant (like me), you can substitute the heavy cream for full fat lactose free milk. I like to serve this over pasta, but it goes well with most any grilled or sauteed veggie dish.

Cook Time: 25 minutes
Ingredients:
·         1 shallot, chopped
·         ½ cup dry white wine
·         2 tablespoons lemon juice
·         1 tablespoon heavy cream
·         12 tablespoons cold butter
·         1/16 teaspoon white pepper
·         5 tablespoons butter
·         ¾ lb medium shrimp, rinsed and deveined
·         1/2 teaspoon salt
·         2 tablespoons Cognac
Preparation:
To make:
Simmer the shallots, white wine, and lemon juice in a small saucepan over low-medium heat for 5-10 minutes, until the mixture is reduced to about 2 tablespoons. Add the cream and bring to just under a simmer. When the first few bubbles rise, turn the heat down very slightly and add the 12 tablespoons of butter, one tablespoon at a time, whisking constantly. Be sure to allow one pat of butter to melt completely before adding the next. Once the butter is fully incorporated, season the sauce with white pepper and set aside.
In a skillet over high heat, melt 5 tablespoons of butter, and then sauté shrimp, turning a few times until cooked through – about 3-4 minutes. Reduce the heat to low and season the shrimp with salt. Carefully add the Cognac (it may flame) and stir thoroughly. Spoon the warm sauce over the hot shrimp and serve.

I've been busy, again. LOL As it gets closer to the holiday season, I don't know about you, but money is always on my mind. Not just money in general, but how to save more of it and get more of what I want. I think that's what a lot of people have on their minds right now. So, what are you to do when you have a "reading habit" that needs to be indulged? Well, that's where my brainstorming comes in. I've put together 2 more collections and am offering them for only 99 cents on Amazon. :)

I wanted to give readers something to enjoy on those cold nights ahead, and I wanted to offer it at a great price. I am pleased to present the Bite Me Collection. Here are all the details.

Thanks to a bet with her best friend, Dawn is about to get involved with the undead love of her life for the second time. So what if he's immortal. It could work, right?
Warning: This book contains graphic sex, graphic language, and one smoking hot vampire.
Frank and The Werewolf Tamer

Katherine has had a hard time finding work, mostly because she's a vampire. Turns out, people aren't clamoring to work with the undead. She goes to the massive theme park, Notte Oscura, as a last resort. What Katherine doesn't realize is, there's a lot more waiting for her than just a job.
Warning: This book contains graphic sex, graphic language, and violence.

Catrina's world is turned upside down the moment she agrees to Viktor's plan. Who even knew that Abraham Van Helsing had a younger brother? Not only that, but a brother who was turned by the King of Vampires and who held such obvious power. Now she must deal with the consequences of her actions and an attraction she can no longer deny.

Viktor wants her to spy on the alpha werewolf, Alexander. He suspects Alex is responsible for the murder of a fellow vampire. However, there is one major problem with this plan. The werewolf is just as hard to resist as Viktor and Catrina is caught right in the middle.

Lavinia accepted what she is a long time ago. She isn't squeamish when it comes to blood or her sexuality. After all, both blood and sex are necessary to sustain a succubus. She is a well-trained assassin. Working for her fellow vampire and occasional lover comes naturally for her. When she is sent out to kill someone, they die. It's that simple. But what if her target means more to her than he should?
Synn thought he knew what he was getting into when he encountered the succubus that first night, but he may still be in over his head. She was sent to kill him, and still he wants her. One man has never been enough for Lavinia, however, the wizard Synn thinks he's man enough for the job. 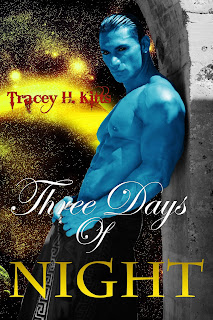 When I realized how long it had been since I blogged I thought, "Wow. I should probably let people know I'm still alive. LOL

First of all, I love this time of year. From October-February, the weather here is fantastic. So, I've been taking longer walks with my dog, Roscoe and spending more time in the fresh, cool air.

Aside from that, I've been working really hard to finish some upcoming books. Some are new and others are re-releases.

Right now, I'm working on getting Three Days of Night ready for its re-release in December 2013. As it stands right now, I should be finished with the final edits this week.

Plus, Three Days of Night is the final book to be returned to me from my former publisher. This means that aside from my works published with Ellora's Cave, I'm all indie. I have to say, that is a great feeling.

Speaking of Ellora's Cave, I've got another book coming out with them, no release date yet. It's called Howl for me. This story was previously published as Once in a Blue Moon, but has gotten a re-vamp. No pun intended. LOL This one is about a werewolf.

In addition to all that, I've got cover art ready to go for the next 2 Lilith Mercury books, both are currently on my schedule for sometime next year. No definite release dates yet.

Oh, and during all this time, the Eternally Yours Vampire Menage Collection has remained on the Dark Fantasy Best Sellers list on Amazon. (in the top 10) I can't wipe smile from my face. :)