Yes, there can be meaning in a vampire menage novel 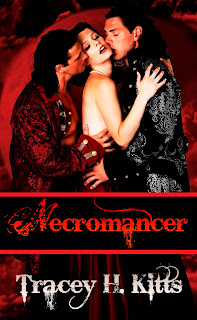 A few days ago I re-released Necromancer. This story was originally published in 2008. Since then, I've added over 8,000 words of new content as well as a revised ending.

I know a lot of people will read the title of this post and think, "Yeah, right." It's sad how many folks are too narrow minded to realize that just because a story has erotic content doesn't mean that it lacks meaning or a real story. I doubt anyone would say that Game of Thrones lacks a plot. I also doubt anyone would say it doesn't have a lot of sexual content. Now, plot-wise, my stories are nothing like Game of Thrones. However, on the surface they are very much alike. They both have a great story mixed with graphic violence and sexual content.

Necromancer in particular has a lot of "me" in the book. So, I'm sure you can imagine that I find the book very meaningful. I'm going to share some details here that when I first published this book I kept to myself. LOL

Real life can inspire all sorts of things in books. Just because this story is full of supernatural stuff doesn't mean there is no "real life" in it.

Okay, now for the details.

1. Jane Masters has the job from Hell that I endured for nearly 4 years.

2. Every single character mentioned at the university where she works is REAL. Names have been changed to protect the guilty.

3. The horrible boss at the beginning of the story was MY horrible boss. The letters he writes to Jane were directly copied from the notes he left on my desk. I REALLY endured this asshole. I'm so proud of myself for telling him to shove it up his ass rather than brutally murdering him.

4. The security guard Jane is involved with was a friend of mine. I wasn't involved with him the way Jane is, but I saw who he really was. It wasn't pretty.

5. Michael Jameson is based on one of my best friends, Stacey.

6. Lastly, and the most meaningful of all to me, her dog Sam is based on my dog Sam. When I wrote this story Sam had just become a part of our lives. As I re-release it now, he passed away 2 months ago. Some days I can think of him and smile. Other days, I still feel devastated. Necromancer is dedicated to Sam.

Trust me when I say that writing this book was therapy. And surprisingly, so was reading and editing it again.

Hopefully, you are now intrigued to know that all the drama is real and figure out how the vampires play into it all. LOL

Here are the details on Necromancer.

Jane Masters has no idea she's a necromancer. Luis and Henri are the vampires responsible for the power mingled in her blood. Though her love life improves dramatically after meeting them, Jane faces a more urgent situation than dating a vampire or two. As Luis and Henri reveal the details of her past life and the source of her power, they learn there's a killer on the loose and Jane is next on the list. As for her newly discovered past with the vampires, her heart remembers them. But will she survive to love them this time?