The Bleeding Heart is available for PRE-ORDER on Amazon!

I am so excited! I had no idea that Amazon allowed pre-order status for independently published books. :) Apparently, I've done something special to qualify for pre-order status. LOL At least, I like to think I'm special. The point is, I can now list my books up to 90 days before their release dates. This is awesome! That means that readers can go ahead and order them while they are thinking about it, and don't have to worry about remembering a release date. Plus, it takes a load off my mind about getting the books uploaded EXACTLY on time.

Most of my books end up being released about a day early. It's not that I'm wishy-washy or anything. When you upload to Amazon through KDP, you are told that it takes anywhere from 12-24 hours for your book to go live on the site. When I tell readers a date, I like to stick to that. I'm all about being on schedule. With this new pre-order thing, Amazon will make sure the book goes live precisely when it is supposed to. I am thrilled about that.

I'm so glad I had the cover art and everything ready ahead of time. :) Now, all I've got to do is be sure to upload the finished product by Sept. 21st. I'm almost finished with my final read-through now. So, provided that my editor/partner in crime doesn't make any more corrections, we'll be in business for the October 1st release date.

Here are all the details on The Bleeding Heart. 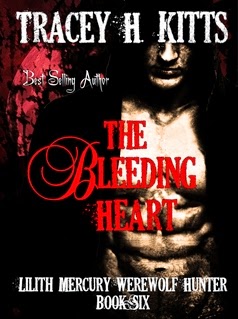 ****This title is currently available for PRE-ORDER. The official release date is October 1, 2014.****
This is Book Six in the Lilith Mercury, Werewolf Hunter Series.

Lilith is finally coming to terms with who she is and the powers she's inherited. For the first time she accepts her scars, the ones you can see and the ones you can't. Her relationship with Dracula progresses as Marco continues to decide where he stands. Marco is slowly learning what Lilith already knows. He belongs with her, as does Dracula...and maybe Bade too.

On a side note, thank you so much for everyone who has written to ask about the next book in the series. There will be one final book after this one, After Dark. That one is coming in January, 2015. It does my heart good to know that a story that I love so much is also loved by so many others. :)

Isn't it strange? One of my favorite comedians, Robin Williams is dead, yet the world hasn't stopped. It feels like it should, doesn't it? It's so crazy to think that this is what happens when someone amazing leaves this world.

I never would have thought that one of my favorite funny men also battled depression for many years. Having fought the beast off and on I can say that I understand. I've never been quite that low, but I've gone awfully dark before. For those who have never experienced depression, be grateful that you don't understand. People from all different walks of life go through depression. It's not just something that happens to poor people, people who are sick, or people who have been abused. So often, those are the stereotypes that go along with depression. You tell someone you're depressed and they say, "But you're not broke," or, "You had a good childhood." That has crap to do with it.

Even when everything is going right, that big black hole can swallow you up, out of nowhere. Sometimes an event can trigger depression, like the loss of a loved one. Other times, you can be on top of the world, yet unable to shake the "funk" that settles over you, and you don't know why. It is a scary and helpless feeling.

One of my neighbors, a friend of the family, committed suicide several years ago. I was in the car with my mother and my son when we drove by his yard and saw him lying there. He shot himself. Another neighbor had just arrived also. It was too late to keep my son from seeing him. For the purposes of this post, I'll call him Jack. Jack took his life with a borrowed gun for reasons that to him seemed dire. He was good looking, and always had a smile on his face. No one even knew he was fighting depression. When I close my eyes, I can still see him lying there beside the pampas grass. It felt like the world should stop then too, but it didn't. Someone new lives in his house now. The last I heard, his family, ex-wife, and ex-girlfriend are all doing fine. If you didn't know better, you'd think nothing bad ever happened on that pretty green lawn. The body of a broken man was never there. Only he was ... and none of us saw until it was too late.

So, I understand why Robin Williams might have felt that he had struggled too long, or that the fight was beyond him to continue. I get it.

But it's something I don't believe I could ever do. No matter how dark my depression has been in the past, giving up is not in me. I will fight to my last breath, no matter the struggle. It's who I am, and it's what I do.

Maybe I shouldn't post this. I'm sure some of you might wonder why I did. Maybe it's to connect with other people who might not realize that they are not alone. If you're struggling with depression, you are not alone. You're not weird. And people who tell you to "snap out of it" need to be kicked in the balls.

Seeing that depression could affect someone like Robin Williams put things into perspective for me. He must have felt so alone ... just like so many of us have felt before.

Depression doesn't strike because you are alone, or because no one loves you. That's not the way it works.

One thing I've learned, that has worked for me, FIGHT IT. Tell yourself that everything is going to be all right because you are the only one who can say that to yourself and make it happen. When you say it, it might feel like a lie. That's okay, just keep saying it. Take B vitamins and exercise. Expose yourself to something funny, repeatedly. Laughter really is like medicine to your soul. Fake it until you make it, as the expression goes. And one day, when you wake up the clouds will be a little brighter. It's not sudden, but it is a change. And it will get better. Find someone to talk to.

I keep asking myself, "Why am I writing this? Why am I opening up like this to complete strangers? Is this wise?" Who knows? But I feel like I should. I feel like someone out there needs to hear it.

You are not alone, and given time, things will get better.

What is a romance novel?

Ever since I first got published, I keep hitting this brick wall. What wall is that? The wall people throw up when they hear that I write romance. This coming Monday, August 11th, is my publishing anniversary. It has been 7 years since my first book came out. :) While that's awesome, I can't believe I'm still talking about the same misconceptions.

Here's the thing, "romance" does not mean fluff and sex. That is what almost everyone assumes when they hear the word. So, let me break it down for those who are confused about the subject. Romance, just like any other genre, can be nothing but crap. That isn't an isolated type of thing. There are bad books everywhere, regardless of the subject matter.

Romance is also not an all encompassing category like it used to be. It doesn't necessarily mean women with their bodices torn open, wearing ridiculous dresses while being man-handled by pirates. (Although, it could.)

There are many sub-genres within romance. Here are just a few that are on Amazon.

You get the point, the list goes on. What does this mean? It means that these are all stories that just happen to also contain a romance within the plot. If John Conner's father had lived, Terminator could have technically been sold as a Science Fiction Romance novel. See what I mean?

I don't think that people who turn up their noses at romance really understand what is out there. Don't judge the whole genre by one or two books that made headlines. That's as ignorant as judging an entire race of people by one stupid person. LOL

Most of what is out there is well-written, and researched material. We're talking good, solid writing, not just a bunch of fluff. Romance novels have something that other genres often lack, genuine emotion. I love horror, but I've read horror novels before and not given a damn when main characters died. Why? Because they were not portrayed with any emotion. I didn't know anything about him/her. All I had was a handful of facts. Facts are cold and hard. They do not "tell" you who the person is. Their actions and reactions paint that picture, and that is what most romance novels provide.

So, what is a romance novel? It is an adventure in any established genre where a romantic relationship between at least two of the characters is involved in the plot or subplot.

While I'm on my soapbox, one more thing: I write about vampires and werewolves because I LIKE IT. I have never written about the paranormal because it is popular. Anyone who actually knows me understands what I'm talking about. I've always been into anything macabre, mythology, horror movies, you name it. That's my thing, and that is why I write about it. I am sick of people insulting me because I write about vampires. I'm tired of comments like, "Oh, how original." Really? How was that called for?

It all comes down to this, I'm doing what I love, and making a living at it. If you don't like that, please feel free to keep your snark to yourself.