I do not read within my genre

Prepare yourselves, I'm going to vent. I know that as authors we aren't supposed to EVER comment about reviews. We are supposed to just sit back and take whatever anybody wants to dish out, and act like it never happened. Yeah, right. Everyone at some point reads their own reviews and gets pissed off. It happens. We are just people like everyone else.

The thing that has bothered me since I first got published is being compared to other authors. It is both rude and presumptuous to post a review saying whom the author has read and where she/he got their inspiration from. Every time I read something like this I want to yell, "You don't know me!"

That's right, they don't. They don't know crap about me or my reading preferences. So, in order to clear up the confusion, I'm going to spell it out.

I DO NOT READ WITHIN MY GENRE. You know why? Because of crap like this.

I have not ever, nor do I ever intend to read anything by Laurrell K. Hamilton, especially not Anita Blake that I am sick of being compared to. I have nothing but respect for Hamilton, but I am sick of hearing about her books.

I have never read anything by J.R. Ward. Ever.

I have never read Anne Rice, though I do own a copy of Interview With a Vampire. It was a gift.


Here are the authors that I do enjoy.

Shakespeare - Yeah, you read that right. I have gotten lots of inspiration from old school writing.

Dean Koontz - I love his descriptions. Each time I read one of his books, it makes me a better writer.

Stephen King - I am a fan of his short stories.

J.K. Rowling - While reading book 5 in the Harry Potter series, I had to stop and start writing my own series. She inspired me to take that first step. I haven't looked back since.

I realize that vampires and werewolves are not new concepts. But no one has ever told MY stories before. Why? Because I invented them. Having a similar theme or idea does not make someone a copycat. Minds who write tend to work in similar ways. The same can be said for any other job. We specialize in forming our thoughts a certain way. So, it shouldn't come as a surprise when tons of authors have similar themes. However, as long as their characters and worlds are different, who cares?

This is far different than simply not liking what someone had to say in a review. Do I think that authors should blog about that? Probably not. But this is calling me a plagiarizer! I just had someone say (in a review) how they "didn't mind" that I took all my ideas and story themes from someone else. Are you kidding me?! In what world is that okay to say to someone?!

I invented the character of Lilith when I was in the 8th grade! She was my superhero. I even drew a picture of her and everything.

I looked everywhere for the picture, but can't find it right off hand. Still, somewhere in my house are my sketches, from the early 90's, of Lilith and my ideas for Dracula.

As I'm sure you all can understand, I'm furious. I never even copied off of anyone's homework assignment before, let alone stole story lines. Just like when I was in school, I HAVE MY OWN WORDS to express how I feel, and my own ideas. I don't need to borrow someone else's.

Thank you very much!

Labels: life of a writer, rants

I have been really, really busy lately. I just finished a new short story for The Naughty Box 2 called "Beautiful Nightmare." It's about a witch and The Boogeyman, and I loved writing it. That should be out sometime in July.

Now, I'm back to work on the 7th book in the Lilith Mercury series. As I've said before, I want to have time to read through both 6 and 7 to check for continuity before The Bleeding Heart (Book 6) is released this October.

Anyway, I thought I would share links here to all the books in the series that are currently available. I get letters fairly often from people who don't realize that books 4 and 5 are already out. :)

So, here they are, and thank you very much for reading my books. I am thrilled to hear that people are enjoying this series, because I love to write it.


This is a collection of the first three books in the Lilith Mercury, Werewolf Hunter series. This series focuses on the life of Lilith Mercury, a werewolf Hunter who is also half werewolf. Did I mention there are several sexy men in her life? This story has graphic violence, and graphic sex. It also has a new take on the origins of werewolves and vampires. There are many ups and downs in Lilith’s life and much more to come.
This series gets hotter as it goes. No werewolves were harmed in the making of this series.
This set includes:
1. Red
2. Object of My Affection
3. The Dread Moon

This is Book Four in the Lilith Mercury, Werewolf Hunter series.
Peter was Lilith's first love--and the first person to call her a monster. Despite their past, Lilith would save him if she could, but when Peter is infected with lycanthropy and becomes determined to challenge Marco for the position of lupinus regalis, wolf king, she faces a hard choice.

Warning: This book contains graphic sex, graphic violence, and graphic language. No werewolves were harmed in the making of this book. 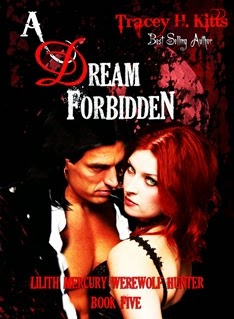 This is Book Five in the Lilith Mercury, Werewolf Hunter series.
Lilith's life is starting to work out for a change. Her relationship with alpha werewolf Marco is going great. There's only one problem: Dracula is dying. Not from lack of blood, but for her love. Dracula would never ask Lilith to risk her happiness for him and so he suffers in silence. That is until Lilith finds out. She must come to terms with her feelings for Dracula and realize that the vampire is just as much a part of her as Marco. But if she accepts this, where does that leave the wolf king?"

WARNING: This book contains graphic violence, graphic language, and graphic sex with more than one partner. Oh, and more wicked sexy characters than can be listed here.