I just realized that I haven't been posting updates on my blog, I've been posting them on Facebook. LOL Soooo, here's the latest on me for anyone who missed it (and wants to know).

For those following the Bound by Blood series, Book Two, Demon's Embrace is now available on Amazon and Book Three, Dragon Slayer Dreams, is now up for pre-order. All titles in this series are part of Kindle Unlimited. Oh, and they're only .99 cents. 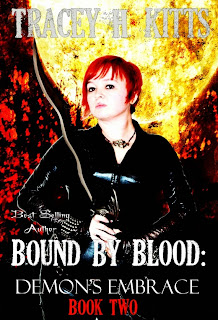 BOOK TWO (of four) (This book ends on a cliffhanger.)

SPOILER ALERT: Read Book One: Oriana's Curse before you read this description.
Nicole's time to find true love is running out. The spell performed by her friend Maggie indicated both Max, her werewolf neighbor, and Vlad, the sexy half-demon to be her potential loves. But can she love two men? Love takes time, which is something she may not have enough of.
Warning: This series contains graphic sex, graphic language, and graphic violence. It also has multiple (smoking hot) partners. There will be a happy ending.
NOTE: This is Part Two and it ends on a cliffhanger.


This is the second entry in the Bound by Blood serial that tells the story of Nicole Austin and her family's curse. These stories are meant to be read in order.

Get your copy here. 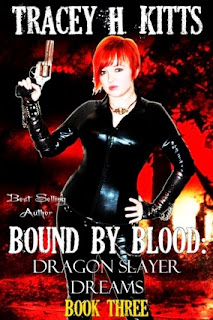 Warning: This series contains graphic sex, graphic language, and graphic violence. It also has multiple (smoking hot) partners. There will be a happy ending.

NOTE: This is Part Three and it ends on a cliffhanger.

This is the third entry in the Bound by Blood serial that tells the story of Nicole Austin and her family's curse. These stories are meant to be read in order.

Get your copy here.

Plus, I've got another exciting group project coming up this October. :) More on that later. (It's the one I posted the cover info about on Facebook.)

As for me personally, I'm taking a break from writing for the next few months. That doesn't mean I've quit. I never really stop. I'm always writing down ideas or making outlines for new books. It simply means that I'm not "actively" working on a new book.

I've got a new story called Night Touch that re-visits Notte Oscura, the theme park from Frank and The Werewolf Tamer, already outlined. I should start working on that one again in August, and plan for a fall release.

What am I doing if I'm not writing? I'm making time to have a life. LOL My stress levels over the past few years have skyrocketed. It's either do something about it and take control now, or have a stroke later. I really don't want to have a stroke.

So, I've returned to my second love (writing is my first), martial arts. I'm training hard 4 days a week, sometimes for 2 hours at a time. I'm doing kickboxing, which I used to be certified to teach. My kickboxing is a mixture of Krav Maga, Muay Thai, and Savate. I'm also picking back up with Shotokan, just to round things out. I'm an orange belt in Shotokan, but I've forgotten so much because I haven't kept up with it. Kickboxing is like breathing to me, Shotokan, not so much. Ha. Ha. But I'm working on it.

In three months when I start back writing Night Touch, I believe I will be in better shape than I've ever been. That's pretty exciting. Plus, all the boxing is strengthening my wrists and that will help me write for longer periods of time without pain.

Hopefully, I'll be able to report a significant drop in stress levels by that time as well.