I just wanted to take a minute to wish everyone as much success, love, and happiness as you can handle in the New Year. I truly hope that 2009 is kind to you and that many of your dreams come true.

So as I eat pizza, play Guitar Hero and plan to watch the ball drop, I wish you all the best. I know that's an overused expression, but not if you really mean it:) If you're going to wish something for someone, why not make it the best?
Posted by Tracey H. Kitts at 5:00 AM 3 comments:

Economic woes and a bit of encouragement

News in general about the economy right now is to say the least, depressing. It seems to be particularly bad for the publishing industry. Considering that I'm a writer, that's really depressing. I would think that since people are having to cut out extras and that going to the movies is more expensive than reading a book, cut out the movies and read a book. It's a cheaper form of entertainment. I'm having to cut out extras too so I understand. I couldn't tell you the last time I went out for dinner and a movie. It's more like pay the light bill, and did they just repossess my trash can? (Long story)

Anyway, it can all get you down if you let it. It seems like at least once a week I hear about another large publisher laying off employees. People just aren't buying books. Although on the plus side, I have heard that ebook sales are rising. But the industry on the whole is taking a heavy hit.

For all my fellow authors out there, keep writing. Someone said to me the other day that if publishers are in such bad shape, then maybe they shouldn't submit their story. Maybe no one will want to take a chance on something new right now. I told them to submit it anyway. Don't ever question the value of your work. At a time like this, when things are so depressing, I read to escape. If I'm not working on my next book, I'm usually reading. Those words you put onto paper mean something to somebody. So, don't ever stop what you do ... even if you think no one wants to read it.
Posted by Tracey H. Kitts at 4:26 PM No comments:

For once, I'm glad I can't sleep. I just got back Bitten for a final read through and I am enjoying this story so much. Since it's been several months since I finished it, I can read it now with fresh eyes. And I love it.

It's so easy to fall for the characters all over again. As you may have guessed from some of the excerpts, the main female character, Sandra, is involved with more than one vampire. One is a former Scottish patriot who fought alongside William Wallace. Another used to be a sword maker about a hundred years ago in England and the last ... is actually my favorite. He's a bit wicked, but I love him even more for it. I won't give away his history, but I will tell you that he's a historical figure that I have always been fascinated with.

I can only hope that everyone who reads the book falls in love with it the way I have. I'm not saying any of this to brag ... more to explain why I like to write and how much I have loved this book. A little bit of me goes into everything I write and I think this story got a slightly bigger portion than usual. I'll probably finish the entire edit tonight. I just can't stop myself.
Posted by Tracey H. Kitts at 8:26 PM No comments:

A little of this and that

I finished the short story I was working on. It ended up being a novella. LOL I'm working on editing/polishing it. Then (while another pair of eyes looks that over) I'm going to start editing Diary of an Incubus. It's about time I got that one off to my publisher:)

That's what I'm up to ... but something else is on my mind tonight. Someone I care about wants very much to come home for Christmas. Only home is never as sweet as his memories. It's full of judgmental relatives and a small town who claims to miss him, but never really knew who he was. It just breaks my heart. I've always known who he is and I couldn't imagine it changing the way I feel. I know what it's like to be misunderstood, although for different reasons. Most people (around here) don't get me at all. With the exception of a few close friends and family members, many people think I'm nuts. Or a total pervert. Some even think I'm goth because I like to wear black. LOL Whatever.

It just hurts my heart to think of him, wanting to be here ... but not feeling welcome. We are related, I'll say that much so I know what he faces when he does visit. I look forward each time to getting to see him (even though visits are usually at least a year apart). I think of him as being like me, not fitting in. I relate to being out of place and I too long for acceptance. Even though I'm independent and as the saying goes I'm a "grown ass woman," you never stop wanting your family's approval. The need to connect to others never goes away. Sure, they usually end up hurting your feelings ... but that means you've still got feelings and that's a good thing.

So if you're reading this and you know I'm talking about you. You are loved, you are missed, and you are always welcome.
Posted by Tracey H. Kitts at 8:42 PM No comments:

To enter my December contest, simply post a comment answering the questions below. The winner gets a free pdf download of Object of My Affection, book two in the Lilith Mercury: Werewolf Hunter Series

The winner will be announced at the end of the month right here:)

Here are the questions.


3. What helps you decide whether or not to purchase a certain book? (cover art, already like the author, genre, or anything else)
Posted by Tracey H. Kitts at 2:29 PM 11 comments:

Brain Dead is up for a New Covey Trailer Award! Please be sure to cast your vote. (Starting midnight Dec. 8th)

New Covey Trailer awards
Posted by Tracey H. Kitts at 11:27 AM No comments:

Bitten and Eden have cover art! 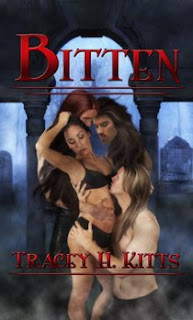 Bitten and Eden have cover art! How hot is this?! I couldn't be more thrilled with the way these turned out. Even the city of Eden in the background is exactly as I pictured it. Not to mention Viktor! And Nicholas (from Bitten) is perfect! (He's the one with the pointy goatee.) 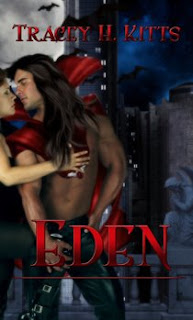 I've decided to add theme days to the yahoo group in addition to the once a month promo. Authors, you don't have to offer a contest/prize or anything, but you are always welcome to if you like. Readers, I hope to see you there:)

**permission to forward granted and appreciated**

http://groups.yahoo.com/group/forbidden_fruitisalwayssweeter
Posted by Tracey H. Kitts at 12:27 PM No comments:

The weather isn't quite frightful

But I still have a nice fire:) There was actually frost on the ground this morning. It's been a long time since I've seen that. I love cold weather. I just realized it had been a while since a posted an update on here. So, I figured I'd tell a little bit about what I've been up to.

I'm still looking for another job to fund my writing habit. It's a good thing I don't do coke or something really expensive. *snort* Not that lack of writing can't cause withdrawals. I always forget how good it feels to write when I take a few weeks or a few months off. As soon as I start on a new story it's like, "Holy crap, why did I take a break?" I try to take at least a month between stories though, just so I can clear my head and come up with fresh ideas. The best works to me are the ones I write after about three months off. That seems to be my magic number:)

Other than that, I've been playing some old video games. I mean really old. Not like Atari or anything, but still pretty old. LOL I've been playing Resident Evil, Code Veronica. What a pain in the ass. It's an interesting story, which is what keeps my interest. But it's HARD. If anyone knows how to beat the Tyrant (or crotch-a-saurus-rex as I've come to call him) please, let me know. I'm working on kicking his butt for the second time and I'm getting pounded like a cheap steak. If you've ever played the game, you'll probably get the crotch joke. There are so many unnecessary shots of this guys crotch that it just gets funny after a while. He's a big buff zombie/cyborg looking thing. Like I want to see a zombie's crotch. Ewww.

To end on a relaxing note, for those of you without a fireplace. I'll share mine:)