Right now, I'm hard at work on preparing the next book in the series for re-release. Object of My Affection has been reformatted, has smokin' hot new cover art, and is now being re-edited. I will edit this several times before sending it to an editor who will then have another go at it.

For those who are wondering, yes, this will be a self-pub title. Object of My Affection is one of the books whose rights have reverted to me. All of these titles were previously published with a publisher. That sounds redundant, but you know what I mean. I don't want anyone assuming that I submitted it over and over and no one wanted it. Quite the opposite. I found a home for the Lilith series within four months of writing the first two books back to back.

As the contracts expire on these titles, I have chosen not to renew my agreement with the publisher. There are many reasons for this. Most importantly, I believe my choice to be a sound business decision. The books I've decided to publish on my own are/will be all professionally edited. Yet again, I'm only clearing up what some people might think of self-pub titles. These are not things that I wrote in my mother's basement and hurried to publish because my bestest friend said they rock. LOL Although, I do have my best friend's unending support. :)

I am also an artist, so I've chosen to do my own cover art for these titles. The cover art isn't something that was thrown together with a title slapped on it. These are images I felt conveyed the meaning of the story as well as looked great. Let's be honest, people really do judge books by their covers and I want mine to look as good as they possibly can.

My point is, I do this for a living and I've put a lot of time and effort into the process. I figured while I was giving an update on my projects, I might as well clear the air about some preconceived notions when it comes to self-publishing.

Object of My Affection should be ready to go sometime in the next few weeks. Wicked City is currently on the schedule for October.

I wanted to take a few minutes and give a quick update. As anyone who has kids knows, summer vacation can be busy. Not in a bad way, I've just had lots to occupy my time besides writing. I've been catching up on video games (when I can get a turn LOL) and spending massive amounts of time snuggling my dog, Roscoe. Ha. Ha. Ha.

Other than that, I spend a good amount of time each afternoon carrying roughly 30 gallons of water to my pumpkin garden. (Thank goodness for the recent rain!) It's fun, but hard work. The temperatures here have been insane. With the exception of getting to spend more time with my son, I hate summer.

I'm sitting here daydreaming right now about that first hint of fall in the air. I wonder when I'll wake up and realize that the seasons have changed? They aren't as predictable in the south as you might think. Anyway, I'm looking forward to it.

At the moment, besides daydreaming about fall, I've just started editing my latest novella. I'm going to give it a thorough polish before submitting this one. Why am I not self-publishing it? Because as I've said before, I believe a little bit of both traditional and self-publishing is good for exposure. The more I can increase the chances of readers seeing my name, the better.

I'll also be adding some word count, fleshing out descriptions and such. Normally, I don't add much when I self-edit. There are very few changes from my finished draft to the final product. I usually look for errors and re-word a thing or two. However, writing during summer vacation leaves holes in descriptions. LOL I've found this out the hard way. It's more difficult to focus with people in the house and video games roaring in the background. Therefore, this story is getting some extra effort in the editing department. After all, I want this to be a good representation of my work before I send it in.

I've already got my synopsis drafted too, so that's a plus. Synopses are not the monster many people make them out to be. I try to think of it as a "movie review" of my book that delivers the entire plot as precisely as possible. That mentality has made writing a synopsis easy for me. I don't think of the book as "my baby." I think of it as my product and look for the best way to describe my product from beginning to end.

Speaking of my product, I'd best get back to that editing while I've got the time. I just wanted to give a quick update. Happy writing!
Posted by Tracey H. Kitts at 12:15 PM No comments:

How about some sexy vampires for Friday the 13th?

Help me spread the word! Diary of an Incubus will be a free download for the weekend of Friday the 13th.


If this title sounds familiar to some of you who have been reading my books for years, I'm glad you remember it. :) Diary of an Incubus is one of my earlier books, originally published in 2008.


This is a re-release that's been completely re-edited and has some added content.


Here are all the details.

Jewel Mathers needed a good story for her next novel. She turned to the ancient journals in desperation. But fame and fortune comes with a price … and a couple of hot vampires.

WARNING: This story contains violence, lots of sex, and some frightening creatures. No werewolves were harmed in the making of this book.

This is her first book with EC. Unfortunately, she is unable to promote it at the moment because a tornado hit near her home and destroyed a great deal of her property. She has no electricity or internet. Her critique partner, Cornelia Amiri, has shared that Ms. Drum and her family are physically unharmed. However, I cannot imagine what they must be going through right now. 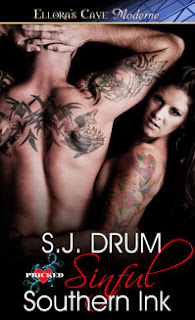 Jed Weston is a tall, hard country boy with dangerous cowboy charm and piercings in all the right places. As Abigail's employee in her tattoo and piercing ship, he's kept things between them on a strictly professional level. Until Abigail's violent past catches up with her and she seeks his comfort - comfort that leads to an intense emotional and sexual connection neither can ignore.